Upward Pressure on Price Due to Declining Inventory: TREB

September’s Toronto and GTA real estate market continued upward trends both in price and number of sales, with double-digit gains happening on price and sales in nearly every category.

Also on-trend were the categories where significant gains were not realized. Detached and semi-detached home sales in Toronto posted a 4.7% increase and a -3.5% decrease respectively. The Toronto Real Estate Board said that this was due to a lack of inventory in these areas. 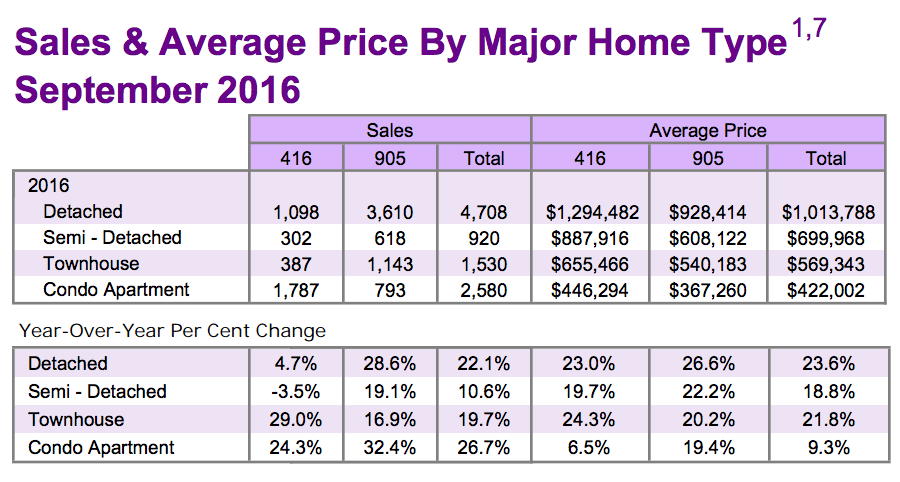 TREB President Larry Cerqua said “We continued to see strong demand for ownership housing up against a short supply of listings in the Greater Toronto Area in September. The sustained lack of inventory in many neighbourhoods across the GTA continued to underpin high rates of price growth for all home types.”

Keeping an eye on new mortgage rules, but inventory is the issue

Average selling price across the board was up by 20.4% year over year – the average price of any type of property is now $755,755. Recently announced rules for mortgages were announced go into effect October 2016, and while the TREB is keeping a watchful eye, it maintains that a lack of inventory is the key driver in the upward pressure on home prices.

The new mortgage rules impose a “stress test”, which measures a mortgage applicant’s financial qualifications not against current market rates, but against a higher five-year rate. While these rules were already in place with applicants with a smaller down payment, the federal Government imposed these rules on all new applicants in an attempt to cool the red-hot housing market and insulate the market – and homebuyers – against potential interest rate hikes.

Where new mortgage rules may impact

The new rules may not reduce the demand for pricier detached and semi-detached homes in properties in the 416 area code due to the need for a significant salary and down payment to gain entry to one of these properties. However, it is hard to believe that the new rules won’t put pressure on the lower end of the market, specifically any townhomes and condo properties across the region, and some semi-detached homes in the 905. Younger families may have to start out in a condo or townhouse rather than starting off in a family-sized home. Young professionals may have to rent a little longer, or draw on the bank of Mom & Dad to either purchase a property or live at home for longer than usual.

While it is true that these new rules were introduced to safeguard the future financial wellbeing of those on the lower rungs of the property ladder, it will mean that some may not even be able to climb up on the first rung – which is frustrating both for potential first-time homebuyers and the real estate market. It may force downward pressure on prices at the lower end of the market so sellers can meet the needs of the demographic they were hoping to sell to, but only time will tell.

You can download the September TREB Market Watch here.