What does a million dollars buy you? In Toronto, it could buy you a detached home — if you’re lucky. Earlier this week the Toronto Real Estate Board released February’s resale market figures, and for the first time ever, the average selling price of a detached home exceeded the $1 million mark.

According to Toronto Real Estate Board President, Paul Etherington, Greater Toronto Area REALTORS® reported 6,338 home sales through the TorontoMLS system in February 2015 — an astounding 11.3 per cent increase in sales compared to February 2014. The overall average selling price for a home last month was $596,163 — up 7.8 per cent compared to February 2014. We can credit these robust numbers to the sales of detached homes, which contributed to over 16 per cent of total residential sales last month. 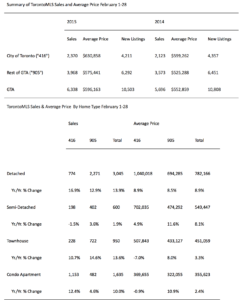 One thing that isn’t on the rise, however, is the number of active listings in the GTA. At the end of February 2015, the number was down 8.7 per cent compared to the same time last year. This, combined with record low mortgage rates is making competition between buyers increasingly tight, resulting in countless bidding wars across the GTA.

On the contrary, however, cities such as Calgary are experiencing a market correction. Despite Toronto’s streak of dominance, one can’t help but ask when we will face ours. Although opinions may vary, consider this — The Economist recently named Toronto as the best city to live in. Additionally, it attracts foreign investors, offers high paid employment, and is Canada’s financial, cultural and social hub. As long as we can maintain these as a city, the odds will remain in our favour.