Your last name doesn’t need to be Hilton to inherit a fortune anymore—at least not in Canada. According to a study conducted by BMO Investorline, Canada is in the midst of experiencing the largest intergenerational wealth transfer in history, with an estimated $1 trillion being transferred over the next two decades. The financial forecast looks favourable for the Baby Boomers who make up the majority of those receiving the funds, as they can look forward to inheriting an average amount shy of the $100,000 mark. Not all estates are planned equally, however, with assets ranging from stocks and securities to land and real estate investment, questions surrounding Canada Inheritance Tax rates and Capital Gains arise.

The Non-Existent Inheritance Tax Canada Has (Or Doesn’t Have)

The Canadian Government does not levy an inheritance tax against beneficiaries, however, when a person passes on, their legal representative prepares a final tax return. Known as a “deceased tax return”, it is reviewed by the CRA and the estate of the deceased pays any taxes owing.

Can You Explain Capital Gain?

According to the Canada Revenue Agency, when you sell capital property at a profit, the result is capital gain. Real estate, securities and certain investments are considered capital property by the CRA, and when these assets are sold at a higher price than what was originally paid, the return is taxable. In the event that the real estate sold is your primary residence, there are no taxes owing on the capital gains from the sale. Although there is no real death or inheritance tax in Canada, some capital gains resulting from the sale of inherited assets are taxable.

Let’s face it—no investor wants to pay taxes on capital gains and unless you’re planning on living forever, a visit from the taxman is inevitable. The good news is that only 50% of capital gains are taxable. For example, if you paid $65,000 for a cottage in 1990 and are planning to sell it at its Fair Market Value, which is now $250,000, you are only obligated to pay taxes on $97,500. Keep in Mind the fact that your assets saw capital gains means that your investments yielded a return. If your assets are continually depreciating in value or see no growth, then you should probably consider reassessing your portfolio or firing whoever is managing it.

The Intricacies of Inheriting a Secondary Residence or Commercial Property

When a loved one passes, he or she may have owned a house or a cottage, or even commercial real estate at the time of their death. If there is capital gain on the property, which is often the case, it is only subject to taxation if it is a secondary residence. If the property is the primary residence, then the estate is not subject to capital gains tax.

What happens if you are currently a homeowner and inherit your parents’ primary residence? If you are a Baby Boomer, chances are you already own a home and are considering selling your parents’ house. Because this wouldn’t be your primary residence, the CRA would consider the profit of the sale income, and it would be subject to capital gains tax. Taxes owing on a sale are determined by subtracting the Fair Market Value (FMV) of a home by its sale price, less any expenses. If you sold the home upon inheritance or soon after, the capital gains tax would be nominal since you would most likely be selling it close to, or at FMV.

There are several other scenarios in which an heir is left with the decision of selling a property or using it as an income property. Recently, we encountered a family who knew all too well, the 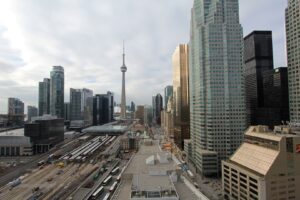 complexity of inheriting an estate.

Nicolas and Jane Simmons, ages 55 and 51 celebrated their 29th wedding anniversary this year and are the youngest of the Baby Boomer Generation. They reside in a Victorian home in the coveted High Park neighbourhood of Toronto with their Australian Shepherd Toby. Nicolas, a Senior-Level Director for OPG and Jane, a Vice-Principal in the TDSB have a substantial income and although they both enjoy their professions, are looking forward to retiring—with their only daughter completing a medical fellowship in Chicago, they can finally begin to live their golden years.

Tragedy struck with the sudden death of Nicolas’ father in November, leaving the Simmons family devastated. His mother had lost her battle with cancer 10 years earlier and as an only child, Nicolas was the sole beneficiary of his parents’ estate. A war veteran turned entrepreneur, Nicolas’ father was financially savvy with a diverse portfolio. The total amount of his father’s assets exceeded $20 million, $12 million of which were commercial real estate, namely income property in the form of residential apartment buildings.

The two low-rise, multi-family dwellings were in an up and coming neighbourhood in proximity of downtown Toronto, had a high walkscore and were easily accessible by public transit. A few of the units were currently vacant, but with the influx of major investors eyeing the neighbourhood, Nicolas was certain there would be no issues securing tenants. But was he ready to be a landlord? The brownstones were built in the late 1920s, and although they saw scheduled maintenance and underwent sporadic renovations throughout the years, Nicolas knew that they were seriously dated and required much work. Nevertheless, with 30 units in total the buildings provided a sizeable amount of income potential.

After settling the rest of his father’s estate, Nicolas opted out of selling the brownstones and hired a Toronto property management company to take care of his new, inherited investments. Although no actual sale took place, the buildings were transferred over to Nicolas, who intended to carry on their use as apartment rentals. The properties were in a state of deemed disposition—like capital gains taxes, Nicolas would pay income taxes on their FMV as they were deemed sold upon the death of his father.

For some, settling an estate can take months and for others it could take years, especially if the estate of the deceased was not planned well. The untimely death of his father made Nicolas think about his own mortality and estate planning. Prior to his father’s passing, both he and Jane had basic wills—but were they enough? On top of the emotional impact and stress, his fathers’ death had on his family, tax implications and the amount of time involved in settling the estate were stressors he did not want his wife or daughter to encounter. Nicolas knew that before he could appreciate his retirement, he would need the peace of mind knowing that he would leave them with a well-planned estate.